In today’s blog we are taking a look back at once of the most substantial events in Ironman History. The war between Dave Scott and Mark Allen was played out over many years and was the greatest friendly Ironman rivalry to exist. It’s an iconic tale of strength, pushing limits and shows the incredible nature of the Ironman contestants.

Both Dave Scott and Mark Allen were very established triathletes before their rivalry began. Scott first entered the Ironman in 1980 wishing to showcase his passion for exercise. Despite being his first Ironman, he defeated the course to come first, as well as beating the previous course record by almost two hours. The extreme show of human strength was the incredible start of his Ironman success.

Mark Allen had been extremely successful at triathlon racing. He had won many other races, but the Ironman had alluded him. His first Kona Ironman in 1982. For years up he achieved third place, followed by coming second to Dave Scott for years in a row. The intrigue between the dynamic pairing rose each year, and there were questions arising of whether Mark Allen would ever take the Ironman crown from Dave Scott. 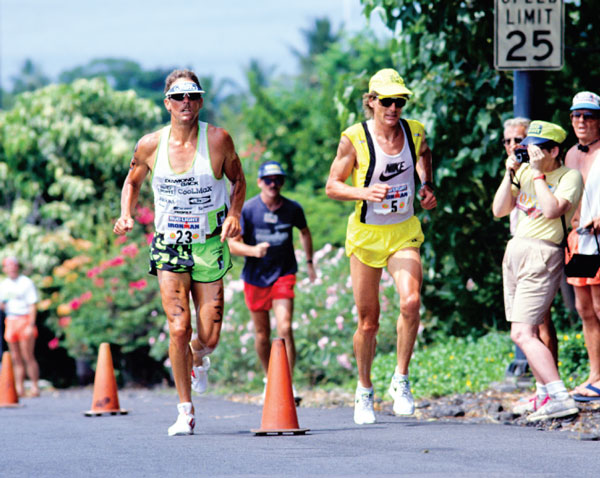 This budding rivalry faced its final chapter in 1986 and 1987 their rivalry was at it’s peak, everyone wondering who the winner would be. Dave Scott still championed the course for those two years. It was constantly close, and people were starting to become assured in the fact that Dave Scott had the course in the palm of his hands.

However, everything changed in 1989. This is the year of the KONA Ironman that people call “The Iron War.” Something was different this year, and it was one of those sensations that was felt before it was known. Mark Allen had been having good runs throughout the year, and it didn’t escape the attention of Dave Scott.

The air at Kona felt different this year – and both of them knew it. The race began, and Allen decides to try and do something he’s never done – to shadow Scott. The key to figuring out what gave him the edge every year, was of course, to shadow him. And he successfully does this throughout most of the entire triathlon. In the water he is right behind, he trails him on the bike ride, and the most incredible feat comes from the marathon.

The Beginning of the End

The marathon was the beginning of the end of their journey, and for the first time in Ironman history they were running practically side by side for a large portion of the race. They are so close to each other, there is barely anything between it. Neither of them relented their unforgiving pace, and they kept it up for 24 miles! They battled it out, until after Dave Scott slowed down for an aid station for water, Mark Allen took over. He didn’t even stop to replenish himself; he pushed onwards and got a hold of a lead ahead of Dave Scott.

He kept up this pace, and he put more distance between him and the reigning champion, managing to do this right up until it was his time to cross the finish line! Mark Allen had finally won the KONA Ironman World Championships after six long years of battling Dave Scott for the crown!

After this Mark Allen managed to take home the Ironman KONA Crown another staggering five times! This means both Mark Allen and Dave Scott have won the crown six times each.

To this day, the story of David Scott and Mark Allen’s Ironman rivalry, and now budding friendship, is one of the most impressive in the Triathlon’s history. Today, they tell the story of their journey together.

It is an incredible feat of human strength, determination, and  endurance about how these rival competitors pushed each other to reach greatness they both thought was unobtainable.