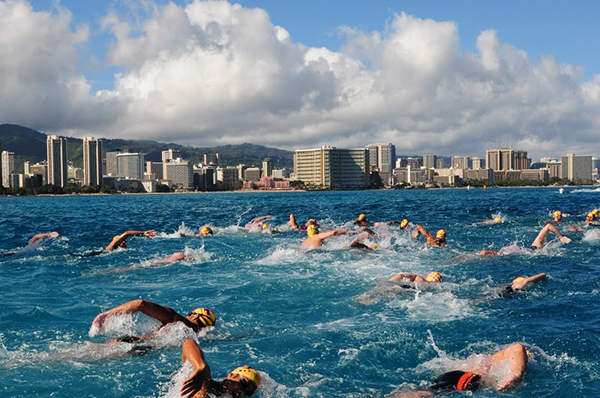 FINA, the international governing body of swimming, are considering draft rules on the legalities of wearing wetsuits at the Rio 2016 Olympic games open-water events.

The chairman of the FINA Swimsuit Approval Commission has been asked to draw up draft rules for the wearing of neoprene wetsuits in Open Water competitions where the water temperatures are likely to be below 18ºC -20ºC.

Open water swimmers usually use swim skins during FINA sanctioned events to comply with the rules of the organisation, specifically:

“No swimmer shall be permitted to use or wear any device which may be an aid to their speed, endurance or buoyancy. Approved swimsuit, goggles, a maximum of two (2) caps, nose clip and earplugs may be used.”

Wetsuits usually include some built-in buoyancy properties so, historically, in usual competition, these are not allowed. Tomorrow (Jan 30th) FINA will meet to discuss the use of wetsuits in Rio as predictions are that the water will indeed be below 18ºC

In triathlon events, there are strict rules as to when you can and cannot use wetsuits based on water temperature. In fact, wetsuits become mandatory in waters below 18ºC and they have maximum times that the athletes are allowed to stay in the water. These rules were drawn up by the ITU, the equivalent governing body to FINA, but for triathlons. All this is to ensure the safety and welfare of competitors.

The director of FINA, Cornel Marculescu, has given his opinion on the news of water temperatures in Rio, saying “the only solution is to allow the use of wetsuits”. FINA are having to rush through the new rules, and in the process have bypassed full discussion with FINA's Technical Open Water Committee which has sparked criticism from some. Merculescu responded with the statement:

“I am sorry, but due to the short time remaining before the OG Rio 2016, we need to be sure that we have taken all the steps to ensure that OWS is safe and respects all the regulations related to the water temperature rules.”

The key recommendations from the researchers are as follows:

So, we could see new rules for open water swimming events across the board in the next year-or-so. Presumably meaning that we'll also have new technical rules for wetsuits in the same way that we currently have for competitive swimsuits. All wetsuits would presumably have to be “FINA Approved” and adhere to a strict set of guidelines laid down by the governing body.

The decision to even discuss making wetsuits mandatory has drawn criticism from some people. With comments such as...

"In the event that wetsuits are approved, this changes the nature of open water swimming in profound ways. If 18ºC is considered too cold and potentially dangerous, who makes this determination? Will all future FINA races require wetsuits when the water temperatures are below 20ºC? While the swimming community knows and readily acknowledges that FINA's upper limits of 31ºC are too warm, a vast majority of the swimming community knows that water temperatures in the 18ºC - 20ºC are entirely reasonable. Cool for some, but not dangerous for the elite, world-class, competitive swimmers who are professionals. " - Steven Munatones (http://dailynews.openwaterswimming.com)

"I cannot believe that FINA is even thinking about this. They should never have been allowed to wear the high-tech suits either because they give warmth buoyancy and assist as mentioned here. All of the major marathon races and endurance swims around the world do not allow any aids like these costumes. In my opinion, this decision if made will not make one iota of difference to the safety of the elite athletes in this even. Perhaps they should put more effort into other safety issues." - Chris Gueden (Comment on http://dailynews.openwaterswimming.com)

For those of us not competing at an Olympic level, wetsuits are a great way to add buoyancy and keep yourself warm during your wild swimming adventures. If you're thinking about buying a wetsuit for your own open water swimming this year then the good news is you can pick up a range of Aqua Sphere OWS wetsuits right now with price ranging from than £70-£90 in our store!

Save up to £175 in our Aqua Sphere wetsuits sale

(This story was first reported by Craig Lord at SwimVortex.)