The importance of tech suits – otherwise known as performance, competitive or racing swimsuits – has been one of the hottest topics of conversation in the competitive swimming world in recent times.

Over the past few decades, professional swimmers have constantly turned to innovative new technologies in their swimsuits to try and gain more of an edge and improve their times.

The defining moment for the role played by tech suits has to be the 2009 World Championships in Rome, where controversial new full body suits came to prominence.

These suits were quickly banned by FINA following changes to swimsuit regulations, but only after a staggering 43 world records were set at the championships. These Worlds have since been referred to as the 'Plastic Games'.

British swimmer Rebecca Adlington was quoted as saying that the full body tech suits were akin to 'technological doping', and FINA promptly introduced a strict set of guidelines for competitive swimwear which started on January 1st, 2010.

We now have a more measured version of the competitive swimsuit, one which enhances the natural abilities of the swimmer, without giving them an unearned edge over the competition. There are strict rules in place relating to materials, fabric weights, water repellency stitching and bonding techniques, body coverage and more.

These highly technical racing swimsuits aren't just for professional swimmers, however. Everyone can make use of racing swimwear, from beginners to advanced competitive racers. But, are performance swimsuits really worth it, and will they make you faster? 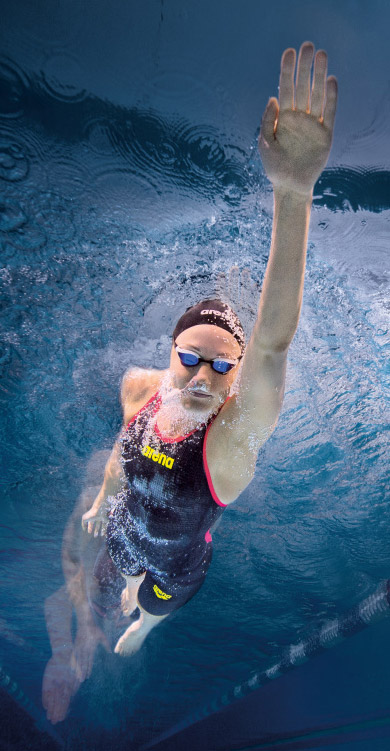 How does a tech suit make you swim faster?

What exactly is a tech swimsuit? What makes it better than a standard swimsuit designed for competition? Tech suits use a range of technologies to help cut down on drag and also improve oxygen efficiency.

To begin with, tech suits are made from a water repellent material, often referred to as hydrophobic. This material doesn't absorb water, which would othewise weigh the swimmer down.

Tech suits also use compression to give a closer fit. This is crucial for swimmers because a slimmer profile helps to streamline them and cut down on drag.

Compression also helps to improve circulation, which can boost performance.

Many tech suits also lack seams, which makes them smooth and reduces drag even further.

Some suits such as the adidas Adizero XVIII racing suits have variations designed for freestyle and breaststroke. These suits have carefully placed seams that provide the additional support that is needed in the leg muscle groups that are used. for these specific strokes.

Another benefit of tech suits, which is important to remember, is the psychological role they play. In addition to actually giving the swimmer some physical advantages in the water, they also have an effect on the mind.

Anyone, regardless of whether they're a swimmer or not, has experienced feeling like a bit of a superhero when they use something shiny and new. If that new item also happens to advertise itself as super technical, that can give another boost to the brain.

So even if a tech swimsuit didn't make you that much faster on its own, it makes you feel faster – which can make you go faster.

Swim records thanks to tech suits

For example, at the 2009 Worlds in Rome, Paul Biedermann knocked four seconds off his 200m freestyle (compared to the year before) and set a new world record, which is still in place.

Why do tech suit prices vary so much?

With thousands of swimmers all over the world competing in a vast variety of age groups and skill ranges, there is a high demand for lower tier performance suits just as much as the elite level suits costing hundreds of pounds.

Now, these suits are not slow by any means, they are just typically not packed with as many performance enhancing features as the elite level suits.

What are the rules for FINA-approved tech suits?

There are also strict rules on the types and thickness of material used, as well as surface treatment, seams and much more.

For a more comprehensive look at FINA approved swimwear and the criteria they must meet, click the link to the right for our in-depth blog article.

Do tech suits make a difference? Our conclusion

It has been proven that tech suits make you faster. They have broken records, they've been developed in labs by professionals and they have had huge budgets poured into their creation.

Scientific research into the effect of tech suits on drag and speed in the water has also returned positive results. This Brazilian report into the Effect of Wearing a Swimsuit on Hydrodynamic Drag of a Swimmer compared the in-water performance of swimmers wearing underwear, standard swimwear and technical swimwear. The report found:

"Total hydrodynamic drag when the swimmer was wearing no swimsuit (light underwear) was higher than the drag of the swimsuit conditions (+40%) where values were very similar, although the new generation swimsuit presented slightly lower drag coefficient and drag force values (-1%).

"Moreover, the pressure drag was dominant, with a percentage of about 82 and 88% of the total drag, with swimsuit and with no swimsuit, respectively. The absolute values of skin friction drag were quite similar in all the conditions.

"From the results, it could be concluded that the swimsuits presented performance-enhancing characteristics when compared to wearing no swimsuit (only light underwear).

"The standard swimsuit presented similar hydrodynamic advantages to the swimmers, as compared with the banned swimsuits.

"The possible hydrodynamic effects of wearing a swimsuit seemed to be particularly related to the factors affecting pressure effects rather than the friction."

The most expensive suits are for competitive swimmers who need to shave precious time off their records, while maximizing their physical capabilities and supporting their muscles.

These features will allow the elite swimmer to perform to their very highest standard for the duration of their race.

Today's most advanced racing tech suits have been engineered to enhance a swimmer's natural abilities in every way possible, within the confines of the strict criteria set out by FINA. When you're competing at a high level, every millisecond counts. It could be the difference between finishing first and second, or the difference between a new record or PB.

However, such is the wide variety of tech suits available these days, they are no longer considered to be for top-level competition only. With plenty of cost-effective alternatives to choose from, swimmers of all abilities can benefit from a tech swimsuit.

Posted in Swimwear and Competitive