Commonwealth Games 2018 Swimming Round Up - Day 3

Day 3 of the commonwealth swimming games 2018 - all the results and highlights from the event! Keep up to date with times and one's to watch with our swimming guide here or follow our social media for live updates!

An amazing last 25m from Duncan Scott saw him take bronze to give him his third medal so far in the 2018 Commonwealth games as well as a new PB!

One of the favourites for this event, England's James Guy, did not even take to the blocks for this race with dehydration given as the reason for his withdrawal.

Cate Campbell posted a third-fastest time ever for 50m freestyle title with a 23.78.

Adam Peaty successfully defended his Men's 100m Breaststroke Commonwealth title, and beat his own Commonwealth Games record in the process, but he was not as dominant as he was expected to be and was pushed hard by James Wilby and Cameron van der Burgh who took silver and bronze.

James Wilby set a new PB thanks to a strong finish in the last 25m.

Despite having another gold medal around his neck Adam Peaty was decidedly downbeat after the race saying;

I won but even though it's a gold medal and it's four years undefeated and that's completed the circle, I'm not happy with that performance because it was not the best version of me. That's the first time ever where I've felt not in control of my race

After a performance that was some 1.7 seconds off his PB, maintaining motivation could be a bigger threat than any rival in the pool as he looks to compete up to the Los Angeles Olympics in 2028. Peaty now has his sights set on the 50m breaststroke event where he will once again look to asert his dominance.

In a close run race Kylie Masse took gold by just 0.03 of a second from Australia's Emily Seebohm. Masse's race-winning time of 58.63 was a new Commonwealth Games record.

Chloe Tutton was an early pace-setter in this race but Schoenmaker timed her charge perfectly in the third 50m to finish strongly and overhaul the Welsh swimmer and take gold in a time of 2.22.02. England's Molly Renshaw just pipped Tutton for silver on the very last stroke of the race to come home in 2:23.28 from lane 2.

Canada overhauled Team England to take silver in a race which was initially dominated by the Australian team. Canada pushed the Australians hard in the final leg but the 10,000 strong crowd saw the home nation hold on to take gold with a new games record time of 7:48.04. 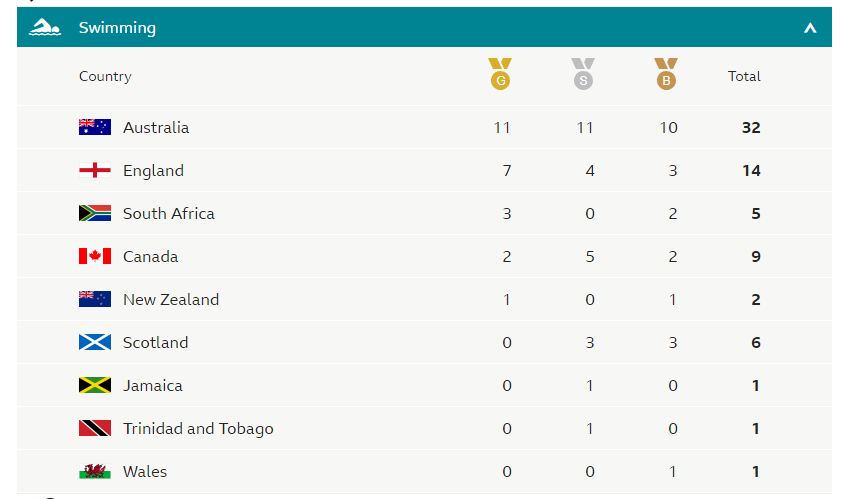