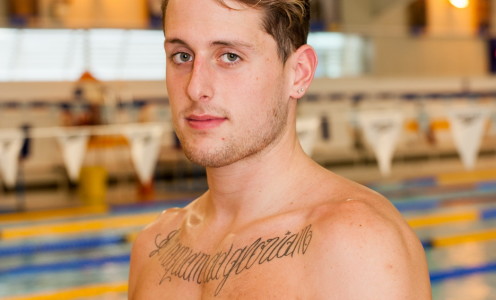 Olympic silver medallist Chris Walker-Hebborn has urged aspiring young swimmers to never lack self belief if they want to achieve their goals.

Walker-Hebborn has just announced his retirement from competitive swimming, calling time on a career that saw him play a hugely successful part in England and Great Britain medley relay teams over the past decade.

The 28-year-old was part of the men's 4x100m medley relay team that won a silver medal at the Rio 2016 Olympic Games.

As a backstroke specialist, Walker-Hebborn's greatest individual achievements came in 2014 when he won Commonwealth and European golds in the 100m backstroke.

"I have achieved more in swimming than I could ever have dreamed of when I was a young kid starting out in the sport," Walker-Hebborn posted on social media.

"I have won an Olympic medal, competed in a home Olympic Games, became a World, European, Commonwealth and British champion, and broke a world record.

"But more important than that, I've been able to travel the world and have a great time doing what I love.

"Lots of people told me I'd never be able to do it and, if there's one piece of advice that I can pass on to young swimmers or kids with a dream, it's to never stop believing in yourself. Give it your everything, and you never know where it may take you."

Bath-based Walker-Hebborn made his international debut at the European Junior Championships in Antwerp in 2007, and became a mainstay of the international scene for the next decade.

Chris Spice, British Swimming's National Performance Director, added: "Chris has been an outstanding member of the GB swim team and leaves our sport as an Olympic medallist, World Champion, European Champion, Commonwealth Champion, and he was also World and European record holder which very few athletes in their careers achieve.

"Not only was Chris was a great individual swimmer but he has been an integral part of our multi-medal winning medley relay teams over the past four years and he made a great contribution across the board.

"We wish Chris well in his future endeavours and I know if he applies himself to the next chapter of his life as well as he has with swimming, then he will be a great success."