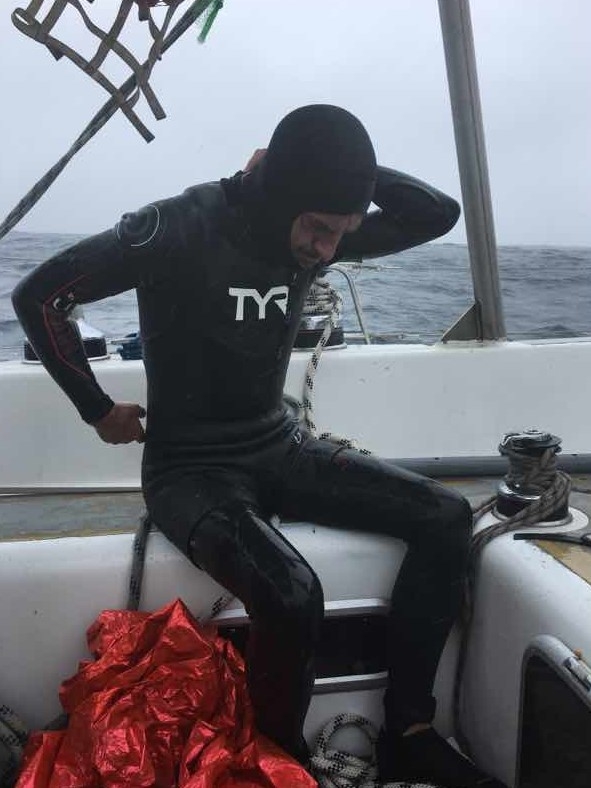 Ocean swimmer Ben Lecomte is making a brave bid to resume his Longest Swim challenge despite the continuing threat of severe tropical storms.

Lecomte had been forced to suspend his 5,500-mile swim across the Pacific Ocean for more than three weeks when two typhoons hit his path.

The 100mph winds and 20m waves forced the Frenchman and his crew to return to a port in Japan, where they've been since the start of August.

However, Lecomte and his team now have a small window of opportunity to return to their swim point — the exact GPS location nearly 700 miles off the Japanese coast where the 51-year-old last exited the water.

"Finally we are back at sea," Lecomte wrote in his blog. "Three days ago, our on-land weather routing team gave us a glimpse of hope when they emailed us their latest weather report.

"It was not quite the report we were looking for, but it gave a small weather window that we had to take the chance.

"When we left we knew that if the two systems coming our way changed their speed and direction we could possibly have to turn back to land again. So the first 24 hours were critical.

"Twelve hours after our departure we got an update on our weather report. The systems that threatened our progression were moving more toward the west than expected. This means that we have more time to sail to the east and reach an area with less tropical activities.

"At the moment we are still in their path and could be in great danger if one becomes a typhoon and comes right below us. We are sailing as fast as we can toward the east and our weather window is still holding."

Lecomte, who is wearing TYR wetsuits and accessories for the duration of the swim, had swum around 650 miles across the Pacific before the typhoons hit.

In that time he has battled jellyfish stings, shark encounters and sickness as he attempts to become the first person to swim from Japan to San Francisco.

The French swimmer is having to consume around 8,000 calories every day to fuel his daily swim sessions, which last around eight hours.