Adam Peaty has hit back at FINA's use of his image to promote the upcoming Swimming World Cup in Kazan – because he has no plans to compete in the series.

There has been a lot of criticism that the social media post shared by FINA on Instagram was misleading people into thinking breaststroke superstar Peaty would be appearing.

The post, which was later deleted on Wednesday evening, showed a picture of Peaty accompanied by the quote: "Do you think you've seen it all? Then wait until I get back to the pool at the FINA Swimming World Cup! So excited to race!"

The post then goes on to say: "@adam_peaty could be saying something like that, don't you think? 7 September we would love to see you all in Kazan! First leg of the SWC is around the corner!"

Many fans had not noticed the follow-up message, and assumed Peaty was scheduled to compete at the meeting. Peaty himself was forced to reply to the Instagram post, confirming that he would not be there.

The five-time world champion and reigning 100m breaststroke Olympic champion has long been a critic of the FINA Swimming World Cup, and has regularly said he wouldn't compete in it unless there were major changes made.

The short course series begins just a few weeks after the 2018 European Championships in Glasgow, where Peaty set a new world record in the 100m breaststroke on his way to four gold medals.

In response to the news about his image appearing, Peaty this week tweeted: "Maybe they need to put them (the World Cup rounds) at a time of year when people want to race as well as 50/50 SC (25m pool) and LC (50m pool)."

This week, he was quoted in The Times as saying: "The World Cup isn't working. It is ridiculous and embarrassing.

"They should put that money to good use anywhere else in the sport. It's completely the wrong time of the season for me and for most swimmers. No one turns up to it and that's why they put so much money into thinking that people will have to come to make a living. But they don't."

The first leg in Kazan will be held on September 7-9. After that, the series has rounds in Doha, Eindhoven, Budapest, Beijing and Tokyo before coming to a conclusion in Singapore on November 15-17. 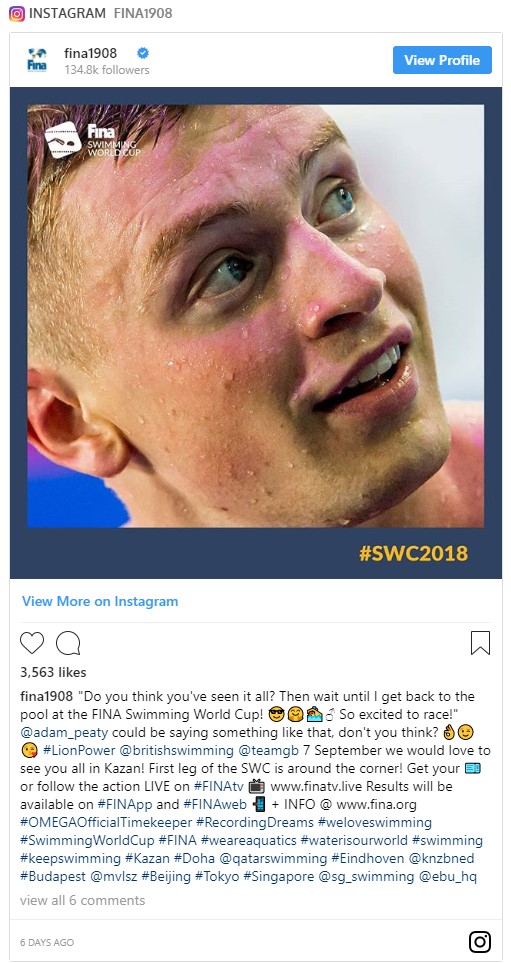