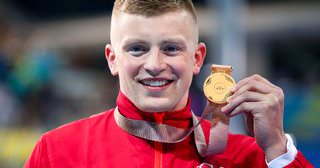 As the world of swimming congratulated Adam Peaty on a four-year unbeaten winning streak in an event he has made his own, the Team England swimmer was his own harshest critic as he reflected on a race in which he felt for the first time in his career that he was not in control. Here's how the world reacted to a race in which Peaty was pushed hard by teammate James Wilby.

In his post-race interview, Peaty admitted that 'even though it’s a gold medal and it’s four years undefeated and that has completed the quad, I’m disappointed, I was nowhere my best'.

He continued; 'My stroke feels nowhere near where it should feel like so I think we’ve got to go back to the drawing board and see how we improve. I think that’s the first time ever where I didn’t feel in control of my race and let the event get to me. I was thinking of the end result rather than the process.'

It appears his problem is that he is a victim of his own success. He is so far ahead of his competitors that he has admitted it is sometimes a struggle to keep himself mentally engaged and motivated enough to keep on winning.

Perhaps he can find that motivation in his 'Project 56' programme which has the sole aim of improving on his own world record of 57.13 seconds which he achieved at the Rio Olympics in 2016. He believes a 56 second time is achievable and he has also stated that a human could potentially swim a 55 second race.

Peaty will now turn his attention to the 50 breaststroke event on Monday, after allowing himself 'a few beers, just to keep my sanity' as a way of celebrating his latest medal-winning performance.