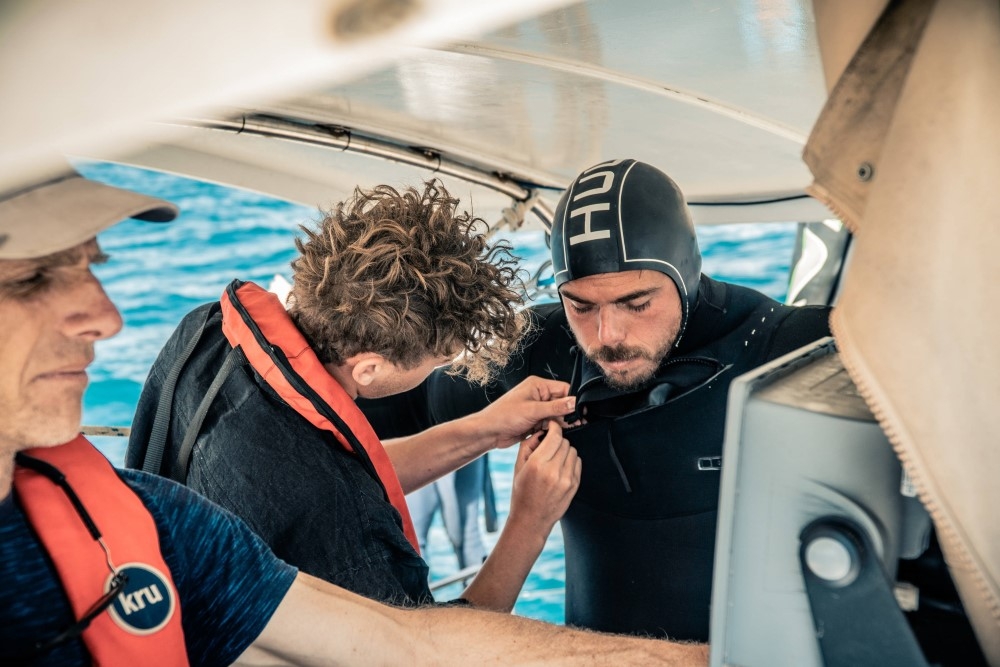 Ross Edgley has pushed his body and mind to the limit as he bids to swim 2,000 miles around the coast of mainland Britain.

His Great British Swim challenge has been fraught with danger since setting off from Margate in early June.

From huge waves, currents and tides in the water to injury, pain and sickness out of it, Edgley's incredible journey has been far from smooth.

The challenge, and the perils he has been forced to face head on, has captured the imagination of open water swimmers and the wider marine community worldwide.

Edgley, who is swimming in HUUB wetsuits and accessories for the duration of the challenge, is now approaching 100 days in the water. He's just rounded the tip of Scotland and will now head south back to the finish line at Margate.

Edgley recently set a new world record for the Longest Contiguous Stage Sea Swim after reaching day 74 without setting foot on dry land. He's got around 600 miles remaining to complete the challenge.

Here, we look at eight of the biggest dangers and obstacles Edgley has faced, and find out how he's been able to overcome them to continue this gruelling swim around the British coastline. 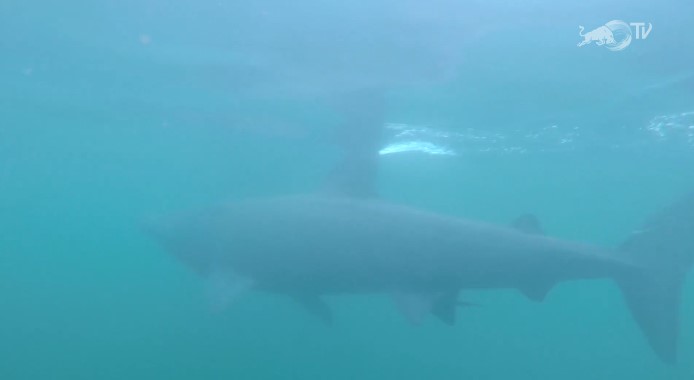 "I'm still not entirely sure how I feel about sharing a swimming pool with a basking shark," said Edgley on his Red Bull vlog.

Luckily, basking sharks are known to be placid and are not known for attacking humans. But it's certainly still an intimidating sight to see a 20ft shark heading towards you!

As Edgley swam around the tip of the Scottish coast, he revealed that his biggest worry was encountering a killer whale and being mistaken for a seal in his dark-coloured wetsuit. 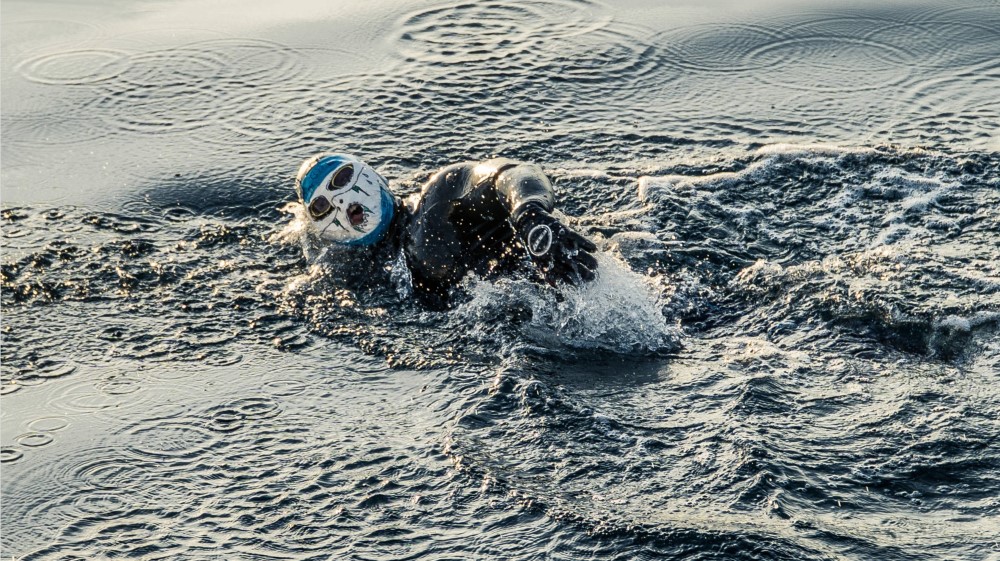 During training for the Great British Swim, Edgley joked that he would grow a bushy beard to protect his face from jellyfish stings.

Sadly, the jellyfish weren't willing to wait and he suffered multiple stings to the face during the opening weeks of his swim along the English Channel.

"The first one wasn't so bad," Edgley said at the time."But once I took the tenth one straight to the face, I popped my head up. I turned to Dom, who was on the rib at the time, and said 'I'm swimming in jellyfish'.

"He laughed and said I was being dramatic. Then they got the big light, we got some footage and it was just crazy.

"It started to get to the point where my face was numb. It was stinging so bad, it was just throbbing."

Edgley has tried several methods of avoiding jellyfish stings, some more radical than others. The most unique was a protective face mask moulded using cling film, but this was quickly dismissed when it obscured his vision too much. 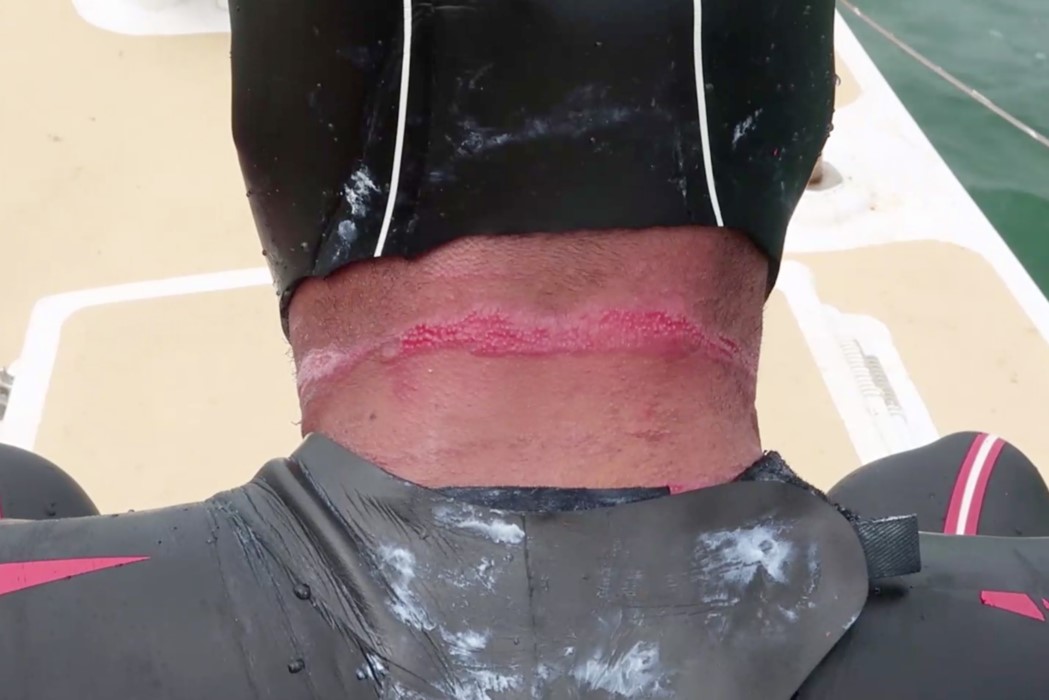 Within days of starting the Great British Swim, the effects of spending so long in the cold water quickly took their toll in gruesome fashion.

Edgley suffered several chafing wounds as his body adjusted to spending more than six hours a day in the sea, and none were more horrific than the wound that appeared on the back of his neck. 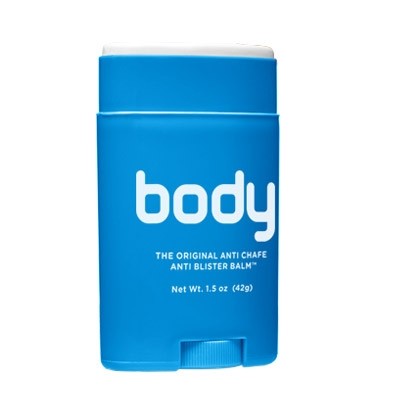 He jokingly referred to it as his 'rhino neck', but the pain and discomfort was intense and he was forced to cover it up with duct tape for several weeks while it healed with the help of anti-chafing cream.

Thankfully, such extreme instances of chafing are extremely rare as most open water swimmers don't plan to spend 100+ days in the water!

But if you do suffer from chafing or cracked skin, try HUUB Sport Luub. It's a great anti-chafing balm specifically designed for open water swimmers, and it also helps a wetsuit or tri suit to slide on and off far more easily.

Body Glide (pictured) also have a range of effective anti-chafing and moisturising creams that really help with treating those minor discomforts that come with wearing a swimming wetsuit for a prolonged period of time. 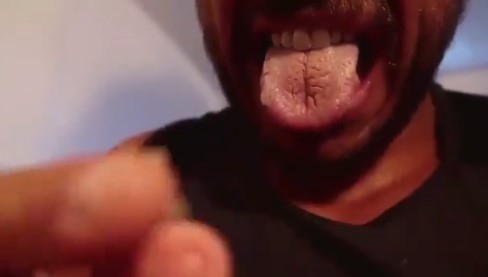 An equally gruesome side-effect of spending so long in the water was the damage to Edgley's tongue.

In the opening month of the Great British Swim, he woke up to find chunks of his own tongue on his pillow. This was due to the effects of 'salt mouth' which left him struggling to eat, swallow or talk.

Edgley was able tear out huge lumps of his disintegrating tongue with his bare hands, which he demonstrated here on his Red Bull vlog. He managed to treat the condition with coconut oil.

Edgley has recently shared a picture on social media showing the shocking damage that the Great British Swim has done to his feet.

After three months in the water, he fears his feet will need some intense rehabilitation when he finishes the swim so he can learn to walk and run properly again.

The graphic image was just another example of the determination needed to overcome such a physically intense challenge.

Edgley did follow this message with a tweet to reassure his followers that he's coping well. He tweeted: "Getting SO many messages of support (about my feet) but honestly I am fine. We’re regularly doing medical checks and I'm healthy as a (sea) horse! And YES, in 600 miles I finish. I can touch land and I can get a pedicure." 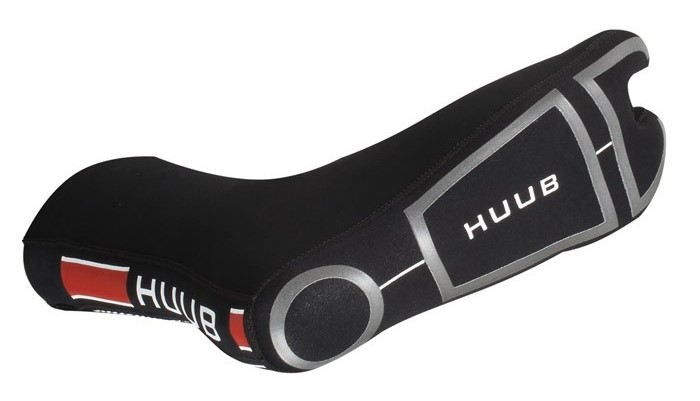 A three-month sea swim may be an extreme example of what can happen to your feet, but there are foot protection options available for open water swimmers.

Swim socks such as the HUUB Swim Sock are great for providing extra warmth and support when swimming in the sea. They also have a split-toe design which helps swimmers to avoid 'rolling' on the foot.

You can also browse our full range of swimming wetsuit accessories for further ideas of how to improve your comfort and warmth.

Edgley had to swim his way across the world's busiest shipping lane after just two days of the Great British Swim.

Navigating his way across the Strait of Dover was a daunting start to the challenge after leaving Margate the previous day, but Edgley was expertly guided safely past the tankers and ferries by his support crew.

Strongman Edgley is no stranger to tough challenges, but the constant grind on the body of spending so long swimming is bound to take its toll.

The 32-year-old expects to make around 3 million swim strokes during the Great British Swim, and he's had several spells of shoulder pain to contend with. When this happens, he's been swimming shorter distances to allow for more physio and recuperation time. 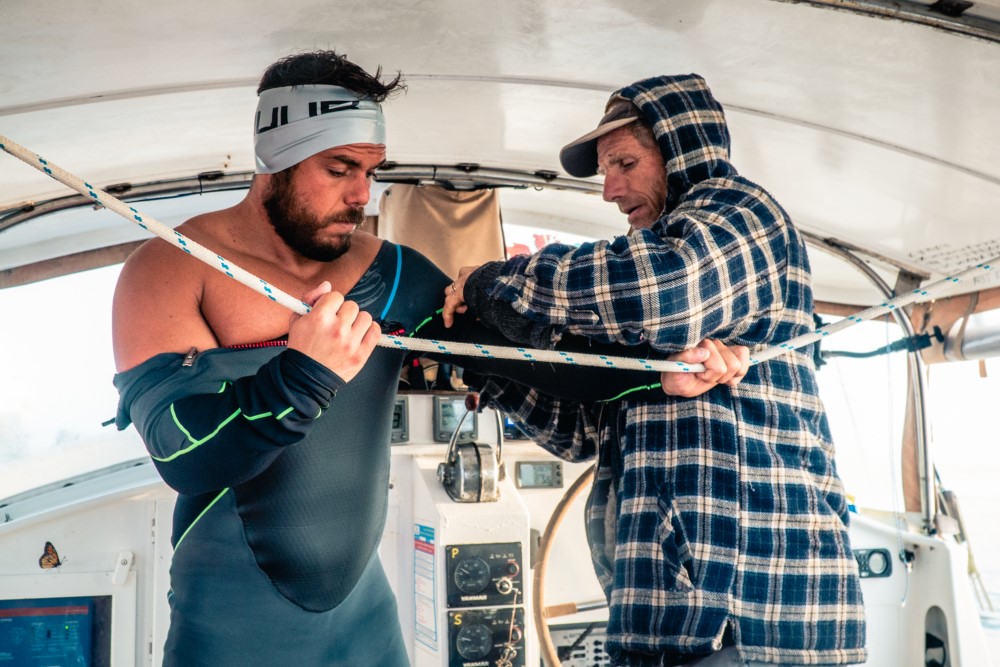 It's not just the toll on Edgley's body that has a big effect on this swim challenge. It can also play havoc with the mind, having to constantly find the motivation to return to the water in the face of extreme pain and discomfort.

Edgley believes it's important to swim with a smile, and has revealed his philosophy behind mental strength when taking on an open water swimming challenge.

"There are a lot of studies on how your psychology affects your immune system – your body’s defence mechanism – and if you’re swimming angry all the time, cortisol, your body’s stress hormone, is going to go through the roof," he said.

"All sorts of biomechanical reactions are going to happen that mean your immune system is suppressed, which makes you more susceptible to illness.

"The very fact that I’ve got over 100 days to survive means that I really can't afford to be ill. So when you see me being all smiley and enthusiastic, that is important for motivation, but it's also important for my physiology and the biomechanical reactions going on inside my body. Studies show that it is better to swim with a smile." 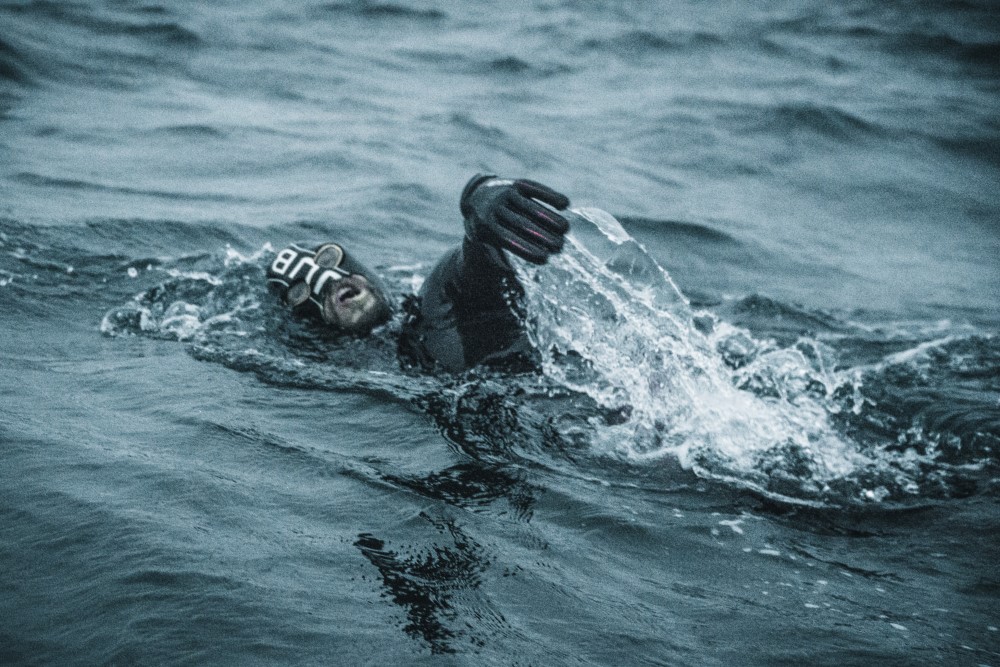 Both the weather and sea conditions have conspired to make the Great British Swim a far tougher challenge than originally expected.

Edgley's target was to complete the 2,000-mile swim in 100 days but, as that milestone approached, he was still swimming down the east coast of Scotland.

Parts of the route have been particularly challenging, particularly the northern tip of Scotland, the mouth of the Bristol Channel and also Lyme Bay in Dorset.

"Trying to swim around there (Lyme Bay) in complete darkness, the tides and currents were so bad it forced us into the bay," Edgley explained on his Red Bull vlog at the time. 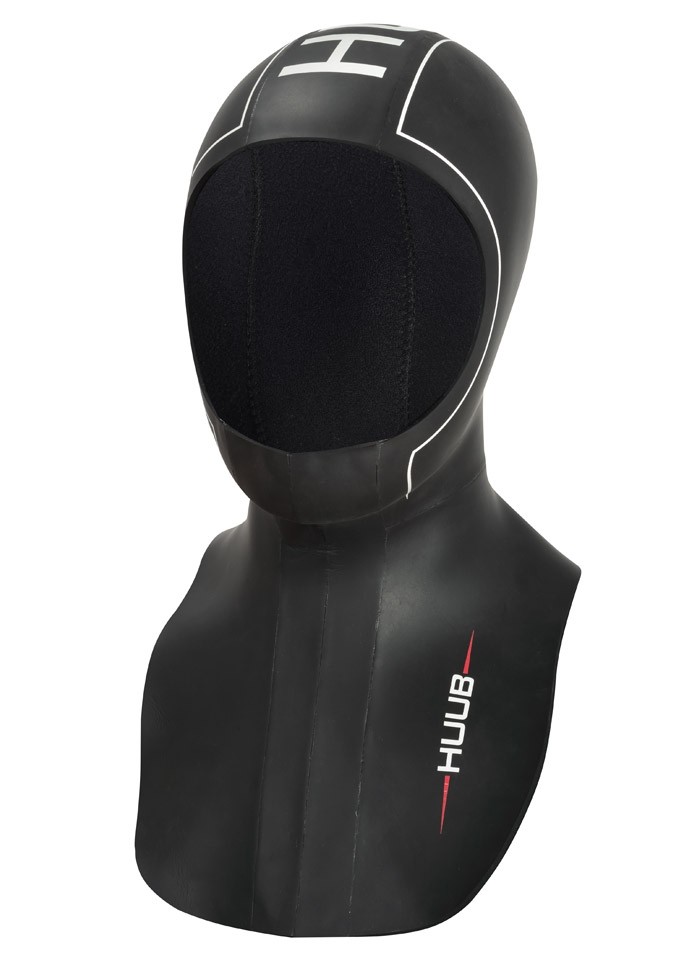 "We could have come back out and tried again to cut across, but there was no guarantee it was going to work, and we could have just wasted so much time.

"We decided to suck it up, swim all the way around, hugging the coastline, which has added so many more miles to the overall journey. Also, we were just eating waves constantly.

"Around Lyme Bay, in a 24-hour period I only managed to swim five miles. I was eating currents, the wind was not in my favour, I was getting stung by jellyfish from every angle. If you average that out, it equates to 400 days."

Keeping warm when swimming in the sea for prolonged periods is vital, particularly in poorer weather conditions. Items such as the HUUB Thermal Balaclava provides full head and neck coverage for warmth and extra comfort.

Posted in News and Triathlon & Wetsuits